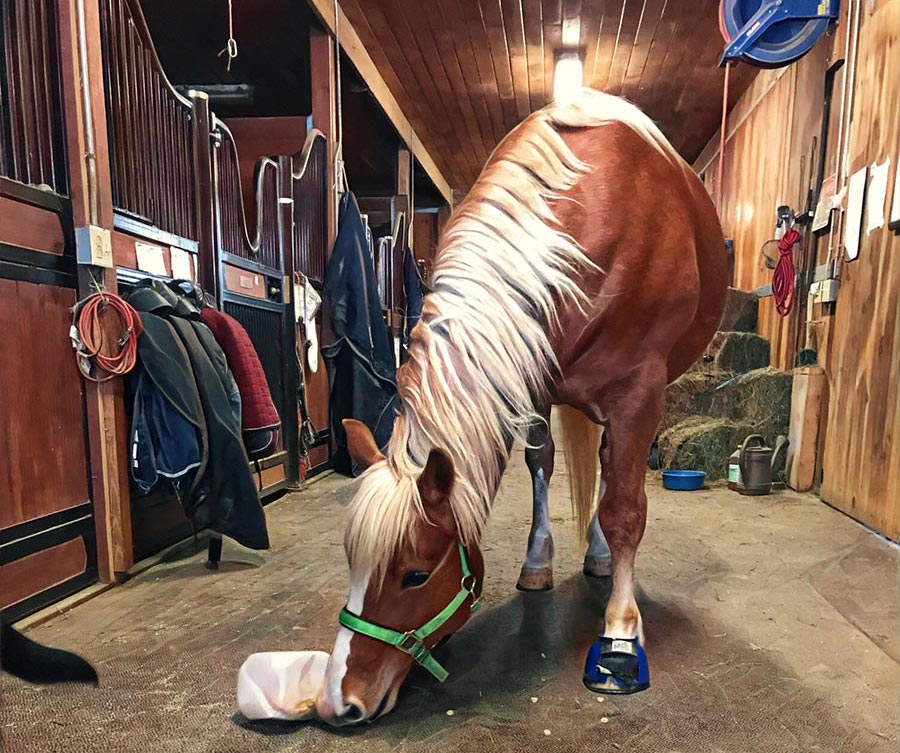 When Finn was a toddler I used to make him “boredom buster” toys to keep him occupied when mama needed some down time. Usually they were quick little things I could put together with what was around the house. Rain sticks made out of paper towel tubes, sorting activities with dry spaghetti noodles and a colander, that sort of thing. Well, now that Finn is 8 years old he doesn’t much need my boredom busting skills. He can read, draw, play with his Pokemon cards. In short, he’s pretty self sufficient and enjoys his down time just as much as I enjoy mine.

But you know who does need some boredom busting? Teddy! Winter isn’t quite over in Vermont and despite daily turn out, all the horses are ready for Spring. You can almost hear them thinking, “Enough with this frozen ground! Give me grass! Give me traction! I need to kick up my heels!”

Me too horsey friends, me too.

So, this week I decided to dust off my crafting skills – such as they are – and involve Finn too. The result? I present to you, our equine boredom buster! Nothing fancy mind you and it took less than 2 minutes to put together, but boy was Teddy thrilled. (So were the barn dogs who happily cleaned up any treats Teddy missed.)

We got the idea from one of our dogs’ “thinking toys.” They have this ball that you fill up with small treats, then they have to move it around the floor with their noses in order for treats to fall out of holes along the sides of the ball. It keeps them occupied and they certainly enjoy it. We figured Teddy might get a kick out of something similar. I know there are commercially produced equine treat toys, but Teddy is so smart that he gets bored quickly. I couldn’t see spending $30 on something I could make for less than $5 in under 2 minutes. Amiright?

To make our toy, we used a box of Kashi “Heart to Heart Oat Cereal,” an empty milk jug and an exacto knife. We cut a small slit down the side of the jug – just big enough for the cereal to drop out without a ton of effort, but small enough for Teddy to have to roll the jug around in order for them to fall out. Once that was done, we poured the cereal into the jug and headed to the stable! That was literally it.

Teddy was mighty pleased with the diversion. We pulled him out into the aisle, placed the jug on the ground, and rolled it around a couple times so he could see treats fall out. That was all it took for him to be intensely interested. After about 15 minutes we picked up the jug, dumped the handful of remaining cereal into his grain bin, then stored the jug for our next visit. Overall it held up pretty well and we will get at least a few more uses out of it.

I probably wouldn’t leave it in the stall with Teddy though – I could see him smashing it or getting it caught on something, or breaking it. So keep a close eye on your horse! But heck it was so much fun to watch him going at it that was half the fun. I see more boredom buster DIYs in our future.

No Grit. No Pearl.

So You’ve Decided to Buy a Horse: 7 Tips For Finding a Beginner Friendly Horse

I Finally Found It: A Mask that Doesn’t Fog My Glasses

was so happy with it my horse loved it. so if you are undecided to do this or not ill tell you he answer: yes do it